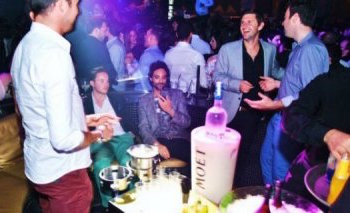 Sources confirmed that upon the arrival of seven mysterious socialites to Rounders Bar around 10 PM Friday night, the entire crowd could be seen staring in awe as the group of four members of Phi Delta Theta and three members of Sigma Nu filed into a corner VIP booth before resecuring the surrounding velvet rope to its wall hook.

“Initially, I was filled with questions,” said senior DKE and Rounders regular Brooks McCaughey, ‘Who are these debonair plutocrats?’ ‘How do they possess such incredible networking as to get that table?’ and ‘What’s it all even matter if I’ll never get to their level of opulence and influence?'” McCaughey lamented.

“Humbling, honestly,” remarked junior Blake Mosley on the experience. “Just to be near someone with that sort of political capital was truly an honor. I called my dad.”

“I got there late, but when I saw those guys sitting alone, I figured I’d go take a shot at getting invited in, said Pi Phi Stacy Lawson. “But for some reason, they started acting uneasy when I walked up.” Lawson stated. “I understand though. I bet when you get to that level of power you’ve got more important things to worry about than casual sex.”

Starstuck onlookers testified that the gathering of what appeared to be Tuscaloosa’s real movers and shakers proceeded to talk amongst themselves for the better part of an hour and a half before exiting the club, most likely preparing to execute Phase One of whatever House of Cards-like scheme the intellectual elites appeared to have cooked up atop their velvet throne.